As if more evidence were needed of the Pope's commitment to honor the memory of Armenians massacred in the genocide by Turks -- Pope Francis recently spoke of the genocide as the world prepared to commemorate that historical mass killing - - the Libreria Editrice Vaticana released last month (8 April 2015) in book form former UC Irvine critical theory and philosophy bibliographer Eddie Yeghiayan's massive, The Armenian Genocide: A Bibliography compiled by Eddie Yeghiayan.

Already online as a searchable database via the web site of the Glendale-based Center for Armenian Remembrance, the bibliography by my retired friend and colleague is now made available in print by
the Vatican Publishing House, making it easier for researchers and collectors who want to flip though its 1126 pages and delve into its annotated contents. 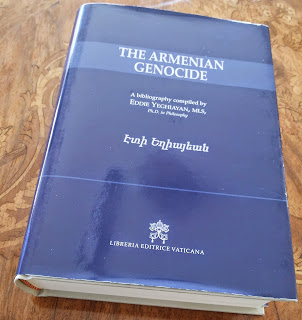 In Italian, the press describes the bibliography as follows:

Although long retired from UC Irvine Libraries, Eddie Yeghiayan appears in a short video clip from Derrida directed by Kirby Dick and Amy Ziering Kofman - as a audivisual sidebar to the current Langson Library lobby exhibit "Through Discerning Eyes: Origins and Impact of Critical Theory at UCI."  While he is speaking in English, the subtitles are in Spanish!

I regret he is not otherwise mentioned in the formal exhibit, although he is the librarian who founded the Critical Theory Collection in the UC Irvine Libraries' Special Collections and Archives and for many years compiled the detailed Wellek Lecture bibliographies on critical theorists.  This omission was rectified during the Q&A that evening.

During the exhibits opening event 9 April 2015, in the Q&A session after the opening talk by UCI Humanities Dean Georges Van Den Abbeele, I related the anecdote of the New York Times calling Eddie up to ask if the newspaper could use a low-resolution photo of Judith Butler that Eddie had taken and posted online next to his bibliography on Butler.  Eddie - the unasuming and generous soul he was - offered to give it to the paper for free. To laughter, I said he could have asked for $1,000.   "He didn't want any money," I added. The photo was subsequently published in the 27 February 1999 edition of the NY Times, p. B11 to acccompany a story on "Attacks on Scholars Include a Barbed Contest With 'Prizes' " by Dinitia Smith that began on page B9.   This past Sunday Eddie recalled the New York Times had offered him $100 which he declined.  The photo is missing from the online version but Eddie is credited.

UCI Chancellor's Prof. (in Comparative Literature) Gabriele Schwab then spoke up thanking Eddie for his "most amazing bibliographies." UCI Humanities Dean Van Den Abbeele from the podium then said he "knew that" and had "consulted" Eddie's Lyotard bibliography "many, many times" and that "it is an amazing piece of work."  He later told me that while French philosopher Jean-François Lyotard had given him (the Dean) some pamphlets of his (Lyotard's) writings, Eddie's bibliography listed every one of them.

At a time when library administrators at many places are urging librarians to collaborate with faculty more, Eddie stands as an exemplary example of the benefits of producing scholarly work that brings recognition to bibliographers and other librarians.

You can listen to the audio of the Dean's talk.  The audio is at times barely audible for speakers from the audience.  See also photos of the opening night.