Visions of Resistance and Survival: Looking Back at the Hong Kong Vietnamese Detention Camps 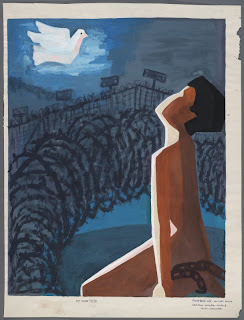 My article on the artwork and literature from the Hong Kong Detention Camps after the Vietnamese boat people exodus is now out as a book chapter. 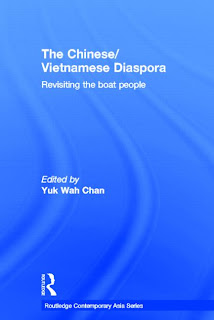 The essay analyzes in detail just some of the artwork and literature from the refugee detention camps in Hong Kong, preserved in the Paul Tran and Project Ngoc Papers, originally given to University of California, Irvine's, Southeast Asian Archive, then under Anne Frank.

I write on the "barbed wire" theme and there are extended references to variations of the "chicken wing" metaphor. There is also a page on the Project Ngoc's "Proposal for Libraries in Refugee Camps." I also include figures on ethnic Chinese from Vietnam who were admitted to Hong Kong. The strange thing is when they arrive in the United States, their Chinese ethnicity is erased and they are treated as Vietnamese refugees. In total, almost half a million ethnic Chinese left Vietnam before September 1979, and at one point, some 60-70 percent of the boat people were ethnic Chinese from Vietnam, according to another contributor to the book, Ramses Amer. In my chapter, there are 25 citations (see below) including several to UC Irvine Libraries' Special Collections and Archives finding aids: Guide to the Paul Tran Files on Southeast Asian Refugees and Guide to the Project Ngoc Records. 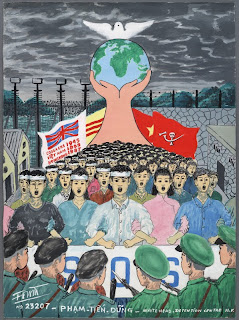 Little Saigon community activist Paul Tran donated much of the materials from the Detention Centers to UC Irvine. The book notes: "When the material were given to Mr. Tran at the time, the authors' intentions were to get their voices heard in the outside world, and the materials were not meant to be sold commercially." Project Ngoc was a student group that sent UC Irvine students and other volunteers to help out the refugees in the camps. I hope this essay sparks further research interest in the collection.

There is more meaty stuff in the volume, so hopefully your library will pick up the unfortunately pricey volume. I found myself learning a lot more about the topic, including that Cholon is misnamed as Saigon's Chinatown (read Li Tana's chapter). More information on the contents of the volume is
here:

Another contributor visited UC Irvine and Little Saigon last year to talk about the detention camp artwork. Sophia Law, of Lingnam University in Hong Kong, was interviewed on Subversity then.

My thanks to Trinh Luu for helping with the translations.

To facilitate further research, here are the references in my article:

Trieu, M.M. (2008) 'Ethnic chameleons and the contexts of identity: A comparative
look at the dynamics of intra-national ethnic identity construction for 1.5 and second generation Chinese-Vietnamese and Vietnamese Americans,' PhD thesis, University of California, Irvine.

'Visions from Prison' (1995) in N. Morris and OJ Rothman (eds.), The Oxford History
of the Prison: The Practice of Punishment in Western Society, New York, NY: Oxford
University Press, 8 pages of unnumbered plates between pages 274 and 275.