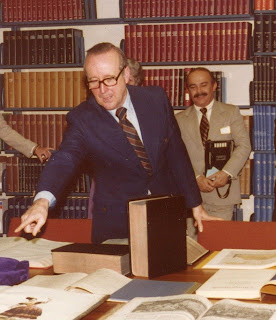 Roger was an outstanding scholar, and at 16, was awarded a four-year scholarship to the University of Michigan in Ann Arbor. He was a member of the Phi Beta Kappa Honor Society. His roommate at the University was Jack Kevorkian, the advocate for assisted suicide. Roger earned his bachelor’s and master’s degrees in History from the University of Michigan. His specialty was Early American History, especially in the era of John Adams, during the Revolutionary War Period. He was drafted into the Army before he could complete his doctoral dissertation.

He became a History professor at Kent State University in Ohio and State University of New York in Potsdam, New York. He earned a masters degree in Library Science from the Library School at the University of California in Berkeley. Professor Robert Harlan of the UC Berkeley School of Information and a former Dean of the School and series editor for Bibliographies at the University of California Press became a close colleague of his, picking Roger as an anonymous reviewer of manuscripts for the Bibliographies series of the Press. Roger Berry was a masterful bibliographer himself.

He worked at the Newberry Library in Chicago before coming to the UC Irvine Libraries in 1969. He was at first a member of the Reference Department. He moved to the Special Collections Department when Elizabeth Karsher was Head, Evelyn Houston was the Assistant University Librarian and John Smith the University Librarian. Roger eventually became the Head of the Department through his retirement in 1991. He was succeeded as Head by Jackie Dooley in 1995.

In 1989 on the occasion of the Centennial of Orange County, Roger and Sylvester Klinicke, the cataloger of Special Collections, compiled and published, with the input of librarians in Orange County, a bibliography on the history of the county as a whole and its individual cities. The compilation would later win the Donald Pflueger Local History Award.

Roger enjoyed living for many years in an apartment on Coast Highway in Laguna Beach with an excellent view of the Pacific Ocean. Next door in the cove closer to the secluded beach area was the actress Bette Davis’ house with a large letter D on it. Once in a Laguna bar Roger met and conversed with the reclusive and camera-shy author Thomas Pynchon, who was bumming cigarettes from other patrons. Roger later saw him sitting on a bench waiting for a bus.

Roger was a fastidious and meticulous person whose prose style was as fine as any and he had mastered all the different areas of the materials which comprised the Special Collections Department of the University of California, Irvine Libraries and which he had developed for several decades. He substantively and unstintingly supported the research and publishing and teaching efforts of the UCI faculty in several academic departments, and countless visiting scholars to the Library.

Roger was proud to be selected as tenor soloist for the Army Corps presentation of Handel’s Messiah. He loved musical theater almost as much as he enjoyed playing his grand piano which he had moved from Michigan to his apartment in Laguna Beach. He knew the lyrics and could sing the songs of most Broadway musicals.

Roger was always an advocate of higher education. He urged family members to advance in life by taking classes and bettering themselves, while providing them with funds to purchase books and other school supplies.

Bibliography of Works by Roger Berry

"The materials listed in the bibliography fall into several main categories: books and pamphlets; great registers of voters; city and county directories to the mid-1960s oral histories; theses, dissertations, and substantial research reports; special newspaper editions; selected documents (federal, state, regional, county, and city); and selected periodical articles drawn from over 230 scholarly and popular journals. Categories of materials omitted with occasional exceptions include fiction, poetry, cookbooks, yearbooks, annual reports, most serial publications, most documents, manuscripts, maps, and photographs. Although a few publications of 1989 are recorded, the intensive effort to identify and report, appropriate listings ended with works published in 1988." – From the Introduction.

Horsfield, John. The Art of Leadership in War: The Royal Navy from the Age of Nelson through the End of World War II, p. ix. Wesport, Connecticut: Greenwood Press, 1980.

Schwab, Richard N., with the collaboration of Walter E. Rex, with a study of the contributors to the Encyclopédie by John Lough. Inventory of Diderot’s Encyclopédie, p. 1. (Studies on Voltaire and the Eighteenth Century, v. 223) Geneva: Institut et Musée Voltaire; Banbury, Oxfordshire: The Voltaire Foundation at the Taylor Institution, Oxford, 1984.

Roger Berry, 81, of Mt. Pleasant, formerly of Irvine, California passed away on Saturday, August 21, 2010, at MidMichigan Health Center in Midland. Roger was born on May 11, 1929 in South Branch, the son of Ivor and Grace Purks Berry.

Funeral services for Roger were held on Wednesday, August 25, at 11 a.m. from the Helms Chapel of Rowley Funeral Home with Pastor Ronald C. Wigan of the Caro Baptist Church officiating. Interment followed at 2 p.m. in the family plot in Oak Grove Cemetery in South Branch.

Roger is survived by his two sisters, Geraldine (Robert) Dillon of Kirkland, Washington and Gloria (Russell) Downhour of Mt. Pleasant, Michigan; and many nieces and nephews and their children. He was preceded in death by his parents, Ivor and Grace Berry; siblings, Ruth (Berry) Murphy, Lawrence Berry, Ivor Berry, Jr., Lois Elaine (Berry) Schwartz, and Shirley Grace Berry.

At the end of April 2010 Roger suffered stroke-like symptoms on his right side affecting his walking, hand movements and speech. Roger's cause of death was a malignant brain tumor.

We are thankful for the efforts of nephews, Alan Schwartz and Jeffrey Berry, who flew to California to bring him back to Michigan; Philip Berry, who cleared out his condo in Irvine, California to his own home; nieces, Gloria (Troy) LaLone and Linda (Dale) Stevenson, who kept a loving, caring vigil by his side during his last days; and Dr. Stephen Schwartz, who led a Scripture reading during his last moments as he slipped away peacefully. – Adapted from the obituary and information from the Berry family.
Posted by Subvert at 6:07 PM