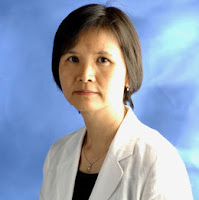 In the next edition of Subversity, a KUCI public affairs program, we talk with Lingan University Visual Studies Prof. Sophia Law (right) visiting from Hong Kong.

We'll ask her about her project documenting and analyzing some 800 pieces of artwork originally collected by Garden Streams, a local community project, from the Hong Kong detention camps of Vietnamese and Chinese Vietnamese refugees in the 1980s and early 1990s. How did she become interested in the issue, and what does she hope will come out of it?

Visiting UCI Libraries this week to research the UCI Special Collections & Archive's Southeast Asian Archive collection of materials, including a several hundred pieces of artwork and publications, from Hong Kong refugee camps in the 1980s and 1990s, Prof. Law will give two public lectures, Wednesday 13 October 2010 at noon at Room 570, UCI's Langson Library, on narratives of trauma in the artwork in the camps, and Thursday 14 October 2010 at Nguoi Viet community room on Moran Street (north of Bolsa Ave. at end of dead-end street) in Westminster at 7 p.m. on Hong Kong's reaction to the influx of boatpeople several decades ago. 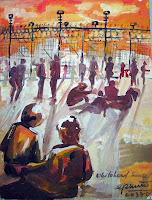 To read more about Prof. Law’s research, see her 2008 essay, “Art in Adversity”.

Prof. Law was also interviewed in Nguoi Viet prior to her visit. [Rough translation from Google]

Prof. Law and Subversity show host Daniel C. Tsang first met in Hong Kong in connection with a 2-day October 2009 workshop held at the City University of Hong Kong Southeast Asia Research Centre that brought together scholars on the Chinese/Vietnamese diaspora. The two are among those contributing chapters to a new collection of essays, The Chinese/Vietnamese Diaspora: Revisiting the Boatpeople in Hong Kong to be published next year by Routledge, edited by Yuk-Wah Chan of City University.